When you want a full spectrum adrenal support product, look no further than Adrenal

VITAMIN B3 – Niacin is vital for the breakdown of fuel molecules for energy. It is also a component of the glucose tolerance factor.

VITAMIN B6 – Pyridoxal-5-phosphate is vital for conversion of protein and carbohydrate stores into glucose to support blood sugar between meals. It is also essential for the formation of several neurotransmitters, including serotonin (from tryptophan), dopamine, and norepinephrine.

FOLIC ACID – Anxiety, irritability, and impaired concentration may be the result of mild folate deficiency, and nutritional supplementation may be of benefit in correcting the deficiency.

VITAMIN B12 – Functional deficiency in the central nervous system (even with normal blood levels of vitamin B12 and without anemia) may cause mood and mental dysfunction. Mild memory loss and confusion associated with aging may benefit from vitamin B12.

PANTOTHENIC ACID – The biologically active form of pantothenic acid is coenzyme A (CoA). CoA transfers carbon groups formed from the breakdown of fatty acids and sugars into pathways of energy production. Pantothenic acid also plays an important role in the formation of electron-carrying cytochrome proteins of the mitochondrial respiratory chain.

ZINC - Zinc-dependent enzymes play an important role in DNA synthesis, neurotransmitter metabolism, free-radical deactivation, and metabolism of a variety of hormones (growth, thyroid, and sex hormones and insulin), which are often depleted with excessive stress.

COPPER – Copper-containing enzymes are required for the synthesis of epinephrine and norepinephrine in the adrenal and nervous system. It is also essential for energy production and, as a cofactor of cytochrome c oxidase, catalyzes the final step of the electron transport chain (oxygen to water) to fuel ATP synthesis.

PABA – Para-aminobenzoic acid is part of the folic acid molecule.

CHOLINE – Research suggests that dietary choline is required in addition to choline normally synthesized in the body for the metabolism of triglycerides and other fats in the liver in preparation for circulation to peripheral tissues.

ELEUTHROCOCCUS SENTICOSUS – Acts as an adaptogen. The herb increases resistance to stress (emotional, occupational, or environmental) and improves performance. It also improves memory and feelings of well-being as well as reducing fatigue.

ROSEMARY EXTRACT – Traditionally has been used to strengthen the memory and cerebral circulation.

NARINGEN – Because of its ability to inhibit cAMP phosphodiesterase, naringen may inhibit excess histamine release.

RUTIN – Rutin is used as a vascular protectant; for reducing capillary permeability, fragility, and bleeding. 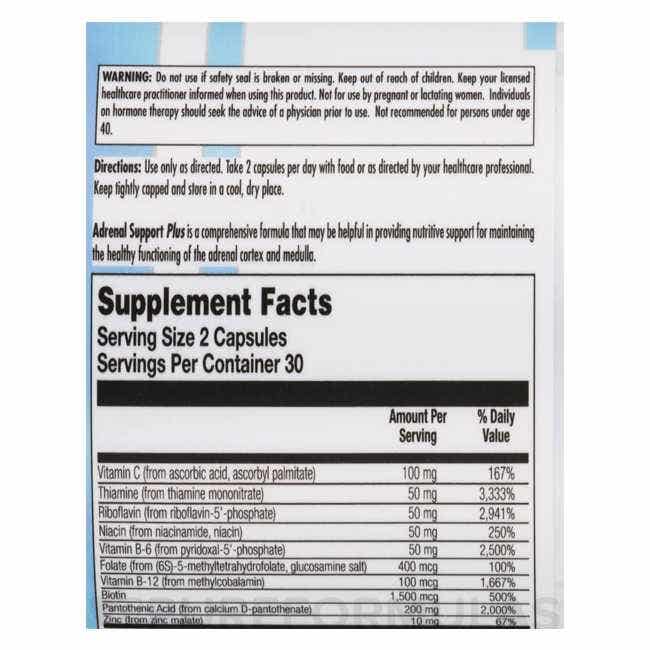 Ingredients
B-vitamins, PABA and DHEA
Other Ingredients
Cellulose, vegetable cellulose capsule, silica, rice bran extract
Suggested use
As a dietary supplement, take 1-2 capsules per day with food or as directed by your healthcare professional.
Warnings
Keep out of reach of children. If pregnant or breast-feeding, contact your healthcare professional before use.
Serving size
2 capsules
Servings per package
30
Refrigeration Recommended
No
Use Ice Pack
No
Brand
BioGenesis Nutraceuticals
Item Number/SKU
091.000672