Dragon Herbs Goji & Schizandra Drops (formerly called Schizandra & Lycium Drops), composed out of Schizandra and Goji (Lycium barbarum) tincture has served as Dragon Herbs' #1 selling tincture for 22 years running. There must be something very special about it in order to maintain such dominance among elite herbal connoisseurs for over two decades without ever falling off the throne.

According to the great Taoist Master Sung Jin Park, the blend can restore youthfulness, slow down aging, invigorate all twelve meridians, increase vitality, calm the nerves, nourish and cleanse our blood, protect the liver, strengthen the mind, improve sexual functioning for both men and women, improve respiratory functions and beautify the skin.

The Herbs in Goji and Schizandra Drops

This delicious fruit is very widely used as an excellent Yin Jing and blood tonic. Regular consumption of Lycium is traditionally believed to lead to a long and happy life. It is said that prolonged consumption of Lycium will promote cheerfulness and vitality. Lycium is also said to brighten the eyes and improve vision. It is said that Lycium strengthens the legs and enhances sexual function. Lycium fruit contains polysaccharides that have been demonstrated to strongly fortify the immune system. Lycium is also very rich in vitamin C and in B vitamins. Furthermore, it is the richest source of carotenoids, including beta carotene, of all known plants on earth and is thus a powerful antioxidant.

Schizandra is a famous tonic historically consumed by Chinese royalty and by Taoist masters. It is one of the few herbs that contains all three treasures. Schizandra is renowned as a beauty tonic and is considered to be a youth preserving herb. It has been used for centuries to make the skin soft, moist and radiant. It is also said to be a powerful tonic to the brain and mind, and is believed in China to improve memory. It is also said to be an excellent sexual tonic when consumed regularly. It is said to help produce abundant sexual fluids, increase sexual endurance and to strengthen the whole body. It is used in many tonic formulations as an "astringent." Schizandra has a wonderful multi‑layered flavor when processed properly.

Schizandra develops the primary energies of life, and generates vitality and radiant beauty when used regularly for some time. If used for 100 days successively, Schizandra is said to purify the blood, sharpen the mind, improve memory, rejuvenate the Kidney energy (especially the sexual functions in both men and women), and cause the skin to become radiantly beautiful.

Schizandra is said to increase the Water Qi in the Kidney. In particular, it is said to vastly increase the “water of the genital organs,” referring to the sexual fluids. Schizandra is said to promote the production of semen. It is famous for its ability to relieve sexual fatigue and for increasing the sexual staying-power in men. Schizandra is also said to increase circulation in and sensitivity of the female genitals. Many women claim increased genital warmth and sensation after using Schizandra for a period of time. The Chinese sexual classics claim that continuous use by a woman will increase the amount of “female elixir,” a euphemism for vaginal secretions, during intercourse.

Schizandra is considered to have “aphrodisiac” qualities, especially when combined with other Kidney tonics. Furthermore, Schizandra is one of the most important astringent herbs used in Chinese herbalism.  An astringent herb conserves fluids, and in the case of Schizandra, it tends to contain sexual fluids until the appropriate time of release. Thus, consuming Schizandra for a period of time, one tends to build up sexual fluids. Schizandra is used in sexual formulations to prevent premature ejaculation and to help promote incredible endurance.

Schizandra is widely used to beautify the skin and to protect the skin from the damaging effects of the sun and wind. Due to the astringent quality of Schizandra, the skin tends to hold its moisture and becomes full and beautiful. It has always been very popular with the wealthy men and women of China because of its youth preserving and rejuvenating effects. I have seen the benefits of this herb with my own eyes hundreds of times in my life. People who start taking Schizandra regularly all change for the better. Their skin virtually glows and becomes clear and fine after several months.

This herb is considered to be one of the premium mind tonics of herbalism.  It is used to sharpen concentration, improve memory and increase alertness. Yet, unlike caffeine-like stimulants, Schizandra does not produce nervousness.  In fact, some people consider Schizandra mildly “calming” while producing wakefulness and improved focus.

It has been demonstrated that human intellectual activity can be enhanced and work efficiency increased by consuming Schizandra.  Various tests have shown that moderate therapeutic doses of Schizandra can improve various activities requiring concentration, fine coordination, sensitivity and endurance. The tests in humans confirming Schizandra’s efficacy in these areas range from threading needles to running marathons.

Human studies have also shown that Schizandra can improve vision, even enlarging the field of vision, and can improve hearing.  It also improves the discrimination ability of the skin receptors. It has been determined that this increased sensitivity is due to improved function of the central nervous system’s ability to analyze data flowing to it from the peripheral sensors

Over the years, Dragon Herbs has made Goji & Schizandra Drops (formerly called Schizandra & Lycium Drops) with several different producers, each with slightly different extraction technologies, secrets and skills. For the last few years, they have been thinking about using FITT to make their tinctures, a green technology that uses a room temperature process to extract herbs so as to preserve all the valuable components in their natural state and proportion.

This proprietary extraction technology captures the original phytochemical profile of a botanical (the plant’s fingerprint) and transfers its safely and almost identically into the final extract, preserving the aroma, color and taste of the plant perfectly.

Recently, Dragon Herbs was overwhelmingly successful at extracting very high quality Deer Antler as a water-alcohol extract (a tincture) with FITT. They were so impressed with what they got out of the Deer Antler that they have now switched production of Goji & Schizandra Drops to FITT. They've been working on it for more than two years and have produced samples with FITT a couple of different times to make sure they should make the switch. Each time, their herbalists and local testers raved about the samples and implored them to make the move.

Individually, both herbs are among the elite tonic herbs in the world. More than three thousand years of keen observation by master herbalists have led to the conclusion that these two tonic herbs have a synergy that makes them even better when combined. And luckily, they happen to taste amazing together, especially when made from extraordinary, freshly harvested fruit.

Many people are using the term "superfruit" a bit loosely these days to describe almost every fruit. Fruit is great, of course, but Goji and Schizandra berries are much more than mere fruits. They are used in tonic herbalism, the art of longevity and radiant health, as key tonic herbs, on par with Ginseng and Reishi Mushroom. Apples, bananas and plums are not used as tonic herbs. Goji and Schizandra possess properties beyond those of normal fruits, and even most true so-called superfruits.

From the point of view of traditional Asian healthcare, these two herbs are perfectly balanced in terms of Yin and Yang, they tonify all three Treasures (Jing, Qi and Shen), nurture all five elements and invigorate all twelve meridians. This simple, sophisticated and profound Taoist formula is incomparable!

Other Ingredients: water, alcohol (30% by volume)

Usage: 3-12 droppers per day or as directed by your health care practitioner 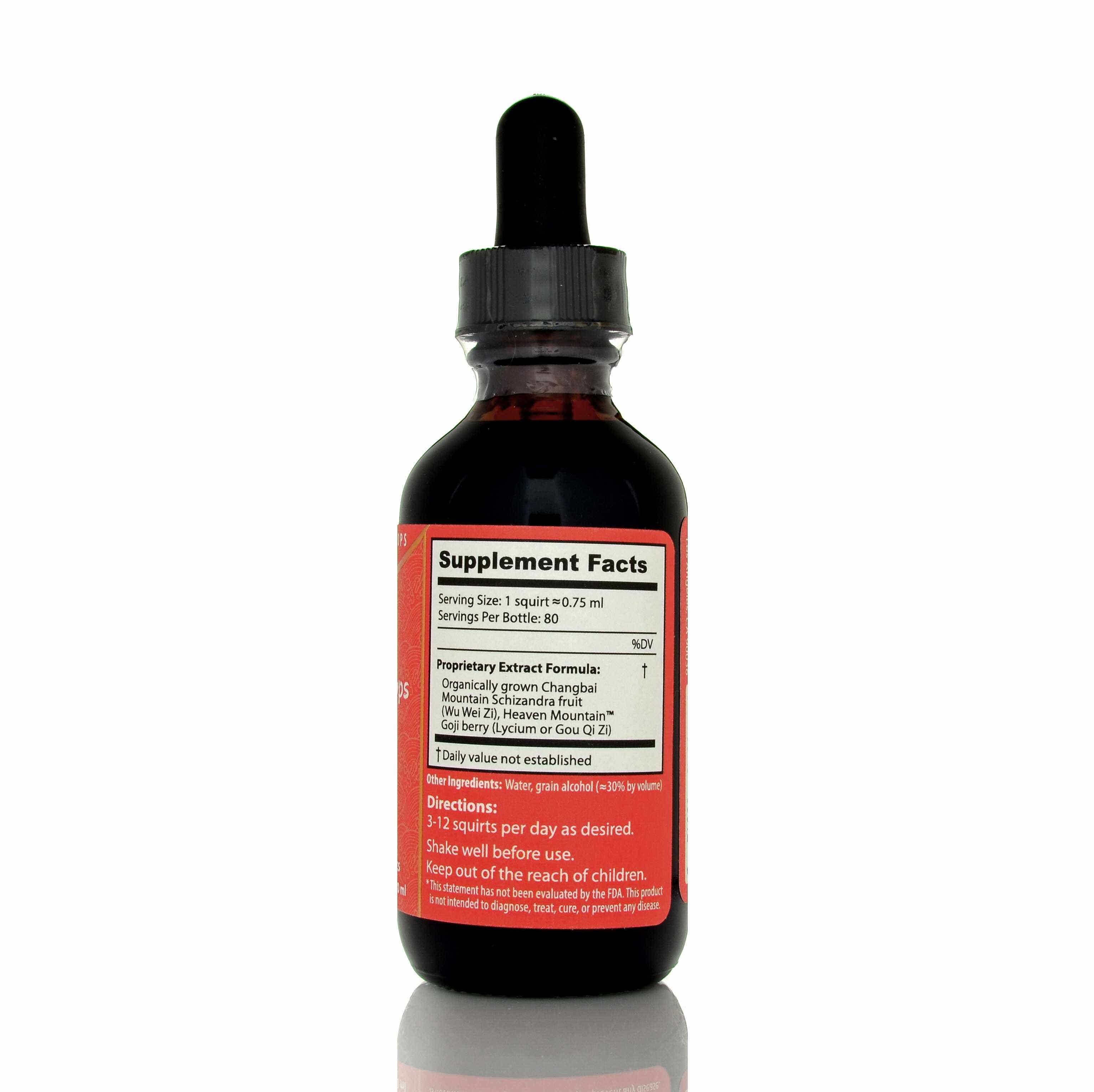