In Asia, Gynostemma is known as a “magical grass.” It has been reported to have a wide range of health-promoting benefits, and is considered to be:

• Invigorating (does not cause hyperactivity – not a stimulant)
• Calming (promotes a sense of peace – not a sedative)
• Anti-aging (antioxidant and more)
• Anti-inflammatory (not as a medicine, but to help reduce the factors that cause low grade, sub-clinical chronic inflammation experienced by all humans)
• Immune-regulating (not as a medicine, but to help support the normal healthy functioning of various immune functions)
• A respiratory tonic (improve respiratory efficiency)
• A digestive aid (Gynostemma is very soothing)

Gynostemma has been shown in animal studies to have liver and cardiovascular-protecting benefits and to support normal healthy functioning in these organs.

The ultimate greatness of Gynostemma lies in its broad spectrum adaptogenic (stress modulating) quality. Adaptogenic herbs improve the efficiency of the metabolic, neurological, immunologic, respiratory and endocrine systems. Prolonged consumption of Gynostemma tends to have a highly protective quality because it strengthens the adaptive capacity of the person at every level of their life.

Gynostemma is popularly believed in Asia to be an anti-aging, longevity herb. Gynostemma is generally reinforcing to overall health, has a strong anti-fatigue effect. It is also used throughout the Orient as a virtual "cure-all."  Gynostemma is a major adaptogenic herb, in the same league as Panax Ginseng, Siberian Ginseng, Reishi, Schizandra and Astragalus.

In China, Gynostemma is widely believed to reduce oxygen deficiency at high altitudes, to improve digestion, to strengthen the mind, and to improve sex functions.  It is also believed to help calm the nerves and to ease pain.

The ultimate greatness of Gynostemma lies in its broad spectrum adaptogenic quality. It has double-direction activity in many areas. It has the ability to bring balance to the body under a wide range of stressful circumstances. Constant consumption of Gynostemma tends to have a highly protective quality because it strengthens the adaptive capacity of the person at every level of their life. The chemical constituents responsible for the adaptogenic characteristic of Gynostemma are saponins called gypenosides.

Gynostemma contains more than eighty different gypenosides.  This is the broadest range of saponins in one plant in nature.  Ginseng, for example has about thirty-six saponins (ginsenosides) and Astragalus has about thirty-two saponins (astragalosides).  These gypenosides are very similar to that of Ginseng and to the eleutherosides of Siberian Ginseng.  In fact, four of Gynostemma’s saponins are precisely the same chemical structure as the saponins found in Ginseng and eleven more are almost identical.  The similarities are so close and so extensive that Gynostemma is now called “Southern Ginseng.”  To the local people who grow it and consume it, it is simply called “Magical Grass.”

Gynostemma is also used to support blood sugar levels, and in Asia it is used widely to help maintain a healthy body weight. Studies have shown Gynostemma to improve insulin sensitivity.

Studies indicate that Gynostemma has a double-direction, regulating, and adaptogenic influence of the central nervous system. It is calming when one is overexcited and stimulating when one is depressed.  Japanese studies have shown that Gynostemma is clinically useful in a number of mental and neurological conditions, including simple depression, anxiety and schizophrenia.

Though Gynostemma is regarded as a tonic herb, it is already perceived by many Asian people to be a “cure all.”  In China, Gynostemma is being used to treat inflammation, stop cough, as an expectorant to remove sputum, to treat chronic bronchitis, and much more in actual clinical practice in Asia.

Who can use it? Anyone. If you are on heart medication, consult your physician. 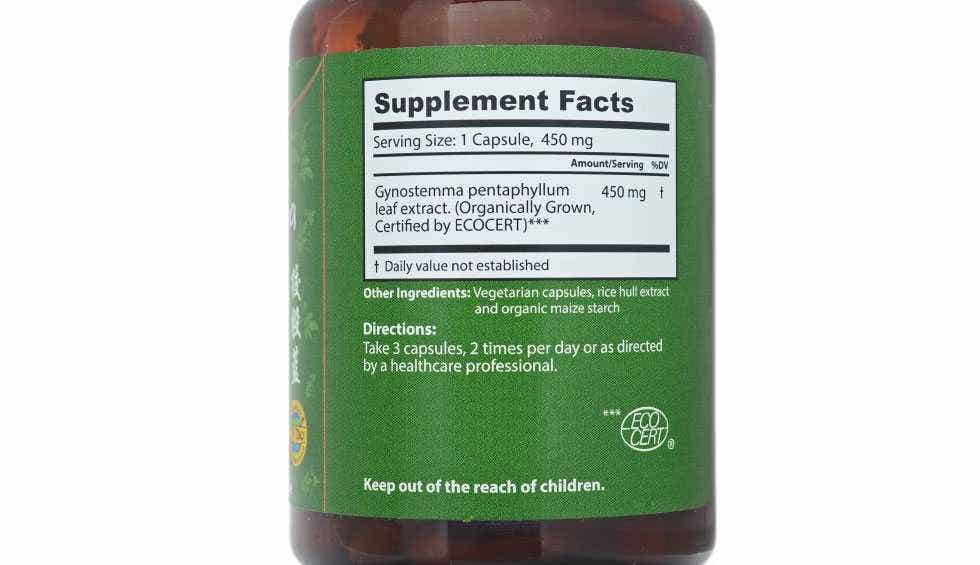