Dragon Herbs Super Ant is a combination of raw Changbai Mountain Ant and a high technology extract  (10:1) of the same tonic Ant.

Changbai Mountain Ant has been revered for thousands of years as an adaptogenic energy tonic of unsurpassed quality. This Mountain Ant is famous for supporting many important life functions and for its replenishing tonic properties of restoring Qi, increasing vitality and nourishing the blood. Polyrhachis Ant is also one of the few truly powerful adaptogenic substances of the earth, helping the body to naturally adapt to change and common stress as efficiently as possible. Polyrhachis Ant is one of the few ‘herbs’ that gives quick Qi to the brain and body, while simultaneously restoring its original source, the Kidney Yin, creating its supertonic reputation for both Qi and Jing.

Ant: the King of Herbs

Ant has been widely used and highly regarded in China as a tonic for over 3,000 years; praised for as a superior tonic with excellent curative powers. Imperial records indicate that numerous emperors and other noblemen consumed ant tonics to promote longevity and sexuality. Ant has been historically considered a superior herb of the highest order: Ant is considered the King of Herbs.

Ants are extremely rich in nutrients, including significant amounts of vitamins B1, B2, B12, D and E . Ant contains more than 42% protein and provide 8 essential amino acids. It contains enzymes and other active substances. The ATP in ants can provide energy directly to the human body. Ants are rich in more than 20 trace elements such as magnesium, calcium, phosphorus, iron, selenium, and especially zinc.

Ant has a bipolar (double-direction) immuno-regulatory activity. It thus fortifies a weakened immune system and modifies an overactive immune system. Ant can have a very beneficial effect on autoimmune disorders such as osteoarthritis, rheumatoid arthritis, gouty arthritis, alkolyzing spondylitis, scleroderma, psoriasis, and some studies indicate significant tumor reducing effects when ant is consumed in therapeutic dosages. Ant has been used clinically for the following disorders in China and other Asian nations: rheumatoid and other forms of arthritis, sciatic neuralgia, hepatitis B, neurosis, insomnia, diabetes mellitus, tuberculosis, asthma, dermatomyositis, tumor, hypertension, and more.

Offering both long-term and short-term energy boosting qualities, ant tonics are becoming very popular as pre-workout elixirs in Hong Kong and Taiwan. Ant has a big reputation in Asia for increasing libido and virility. Both men and women claim that after using ant for even a short time that their interest in sex increases significantly and that their sexual performance improves in numerous ways.

Both physical and mental energy seems to be supplemented by consuming ant. Ants can carry a load of 100 times there own weight, and people have long felt that consuming non-toxic varieties of ants can increase physical and mental strength. Students in particular have made ant elixirs a virtual craze in cities like Shanghai , Hong Kong and Beijing. It is commonly used by those who have become fatigued or exhausted due to excess workloads or other forms of stress, including mental sources. Ant is noticeably energizing when consumed for a short period of time and builds long-term energy if used continuously for awhile.

Who Can Use It? Anyone

Directions: Take 2 capsules, 3 times per day or directed by a healthcare provider. 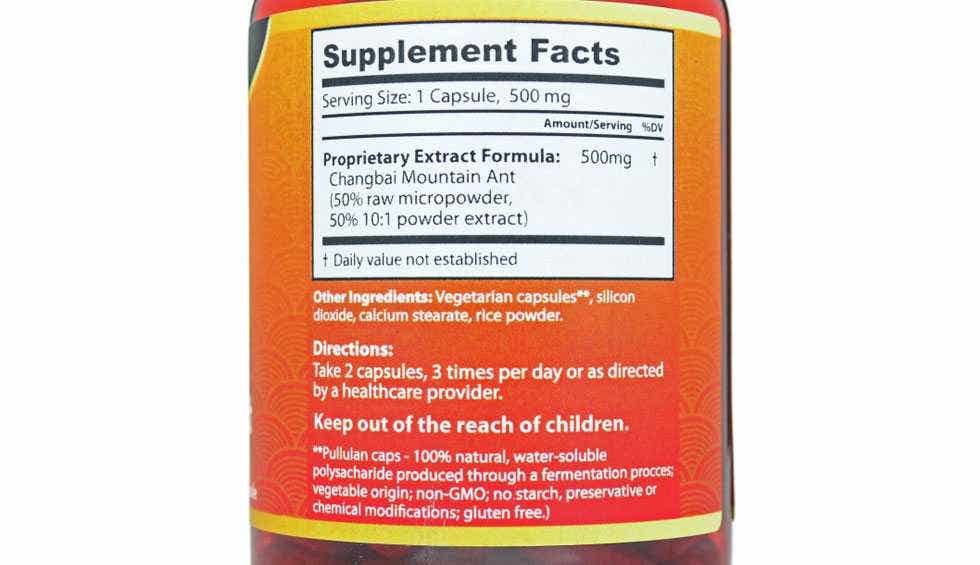