Men and women in Asia have long regarded it as an art and a science to improve their sexual function, or to bring it back to youthful levels when there has been an age-related decline. TomKat is a remarkable tonic formulation designed for men. It is tonic in that it is safe to consume and may be consumed for long periods of time (with occasional short breaks). It is composed of just three substances which may have profound benefits on the male sexual functions. All three ingredients have been used for over a thousand years and are well known to be safe and effective.

Tongkat Ali is an herb that is very widely used in Southeast Asia as a male sexual tonic. It is giant among male sexual tonics. Tongkat Ali has a measurable and obvious pro-sexual effect. Tongkat ali is a  noticeable libido enhancer. Men who use this herb feel that their sex is more “direct.” Ejaculatory force diminishes for any man as he reaches an age of around 50 and beyond, Tongkat ali provides marked ejaculatory support. Tongkat ali has an effect that can be felt after one or two hours, though it is definitely a long term tonic that seems to become better and better the longer you use it. Tongkat Ali is used in Asia to promote better ejaculatory power, multiple orgasms, and to enhance a sense of “maleness.”

It also promotes a sense of clarity that remains throughout the day, accompanied by a sense of positive assuredness. Tongkat Ali increases testosterone tone, but is not a testosterone agonist. Anabolic steroids are testosterone agonists. They cause a negative feedback reaction of the pituitary and hypothalamus (the two glands secrete a series of hormones that signal Leydig and other testosterone synthesizing cells to stop testosterone production). The result of steroid use is a definite shrinkage of the male genitals, especially the testes.

The exact modus operandi of how Tongkat Ali increases blood testosterone levels without causing a negative feedback loop is still not scientifically clear. But it is widely believed that Tongkat Ali is neither a testosterone agonist or antagonist. Tongkat Ali stimulates testosterone production by interfering with the testosterone negative feedback loop. Even when Tongkat Ali raises testosterone levels, the upstream pituitary and hypothalamus do not respond by signaling that testosterone synthesis should be tuned down. Tongkat Ali has the reputation of letting a man have the same quality of sex they enjoyed in younger years. Many men report that their sexuality actually is better than it was in their younger years. They report that TomKat enhances both passion and performance. The main effect of TomKat is that men feel very sexually alive, focused and driven when they are consuming this herb. Its affect on the head seems to be as strong as its affect on the genitals. Men feel younger on Tongkat Ali.

TomKat contains two major supporting herbs. Chinese Mountain Ant (Polyrhachis vicina) is an extraordinary ingredient from the Chiangbai Mountains of China. This ant is not a stimulant or irritant. It is a powerful adaptogenic tonic that has been used in antiaging herbalism for over a thousand years. Mountain Ant is extremely rich in organic zinc, the element called the “man’s mineral” because of its powerful effects on male sexual functioning. In China, Mountain Ant was called the “Herb of Kings” because it was an ingredient in the formulations consumed by emperors so that they could handle their hundreds of concubines. He Shou Wu is one of the most famous sexual tonics in Asian herbalism. It is a Yin tonic that provides deep reserves. It too is rich in zinc. In addition, He Shou Wu is believed in increase sperm production and generally enhance libido. The reputation of He Shou Wu revolves around its deep long term sexual building and fertility enhancing power.

No Common Side Effects

TomKat does not have the side effects that are quite common with herbal and pharmaceutical “aphrodisiacs.” TomKat is a tonic formulation, and all three herbs are considered safe to take indefinitely by adult men. In fact, in Asia, all three herbs are believed to promote longevity. In that it doesn't cause unpleasant side effects, Tongkat Ali is different from all other herbal and pharmacological sexual enhancers. Calm, self-assured energy is the generalized side-effect of taking TomKat as a male libido enhancing supplement.  Ant allergy is not associated with this species of ant, however, if you are allergic to ants, this product should be used with caution. Consult your physician before using this or any herbal supplement. TomKat is not a medicine used to treat, mitigate or cure erectile dysfunction.

Who can use it? Men. (Women may use it in smaller quantities and under the guidance of an herbalist)

Precautions:
Use only as directed. Do not use continuously – take 5 days off out of every 30 days. If you feel hot or agitated stop for one day and reduce dose. 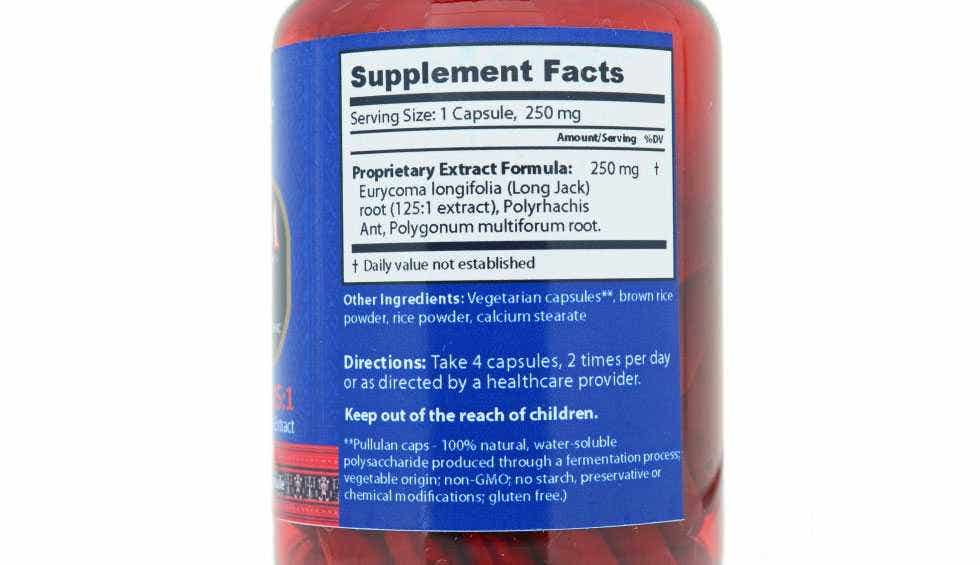